Note: Please review the above chart to see when these mergers/acquisitions got going…1998…so what happened then…see my earlier post about GLBA, and the demise of Glass-Steagall. It is also instructive to see what happened to community banks following the 2008-2009 Depression -a large percentage basically disappeared to be replaced by one of the four behemoths. 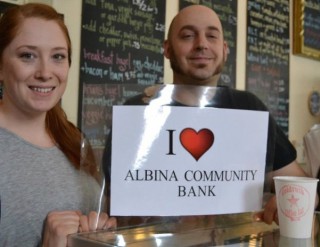 Here’s a statistic that ought to alarm anyone interested in rebuilding local economies and redirecting the flow of capital away from Wall Street and toward more productive ends: Over the last seven years, one of every four community banks has disappeared. We have 1,971 fewer of these small, local financial institutions today than at the beginning of 2008. Some 500 failed outright, with the Federal Deposit Insurance Corporation (FDIC) stepping in to pay their depositors. Most of the rest were acquired and absorbed into bigger banks.

To illustrate this disturbing trend and highlight a few of the reasons we should treat it as a national crisis, we’ve published a trove of new graphs. These provide a startling look at the pace of change and its implications. In 1995, megabanks — giant banks with more than $100 billion in assets (in 2010 dollars) — controlled 17 percent of all banking assets. By 2005, their share had reached 41 percent. Today, it is a staggering 59 percent. Meanwhile, the share of the market held by community banks and credit unions — local institutions with less than $1 billion in assets — plummeted from 27 percent to 11 percent. You can watch this transformation unfold in our 90-second video, which shows how four massive banks — Bank of America, JP Morgan Chase, Citigroup, and Wells Fargo — have come to dominate the sector, each growing larger than all of the nation’s community banks put together.