Settler Terror and Its Apologists – Article with Commentary

Israeli settlers have waged an organized campaign of mass violence against West Bank Palestinians for decades.  It began in the 1980s with bombings which severely injured many members of the Palestinian political leadership.  Now, the third generation of those terrorists is making its mark on the political landscape.  They are following in their tatehs‘ and zaydehs‘ footsteps by desecrating mosques and cemeteries, razing and burning agricultural land, slaughtering flocks, and maiming and murdering Palestinian civilians.  They’ve done so with impunity.  All the while living high off the land stolen from these same Palestinians.

This new generation is standing on the shoulders of its forefathers and reaping the benefit of their political achievements.  But not to be outdone, the young ones have devised their own form of high-profile terror attacks designed to lead to an all-out war between Jews and Arabs, which Israel will presumably win.

To this end, they’ve engaged in ever more cruel and brutal acts of terror, the latest one being the arson-murder of the Dawabsheh family, which killed a young mother and father, their youngest baby boy, and left one young son alive as an orphan.

The Shabak was inclined not to do much to solve this crime.  Several months went by without any movement in the case.  Defense minister Bogie Yaalon made noises that the crime might never be solved in order to protect the settler snitches it had recruited as spies (at least one of whom betrayed his handlers by not informing them about this plot).  But then a United Nations official and European leaders began calling for action.  Israeli Palestinian MKs filed suit before the Supreme Court demanding that the defense minister and attorney general take action.  All of a sudden, the police had the case in hand.  “Meaningful progress” was being made.  Arrests were imminent.

Netanel Porkovich, suspected of being an accessory to the Dawabsheh murders

Thanks to foreign involvement and the potential embarrassment of having the Supreme Court raking them over the coals, the security apparatus made arrests.  They’re all under gag order, which I’ve broken.  Four alleged conspirators are in prison along with one accomplice, Netanel Porkovich, who’s accused of giving them the vehicle they used in the attack.  Porkovich is the “youth secretary” of Kochav HaSachar.  Imagine, an accomplice to murder who is a community youth leader!  It should tell you what sort of education these youth are getting.  The father of one of the suspects, Rabbi Moshe Odess, is also in prison, a tactic the Shabak likes to use to exert pressure on young suspects.

But what’s astonishing is the PR onslaught orchestrated by the settler political lobby.  It’s a very powerful one, as I’ve written here before.  It essentially controls almost all the levers of power, though it likes to make a dramatic flourish every so often about its rights being trampled upon and politicians betraying them in various ways.

Settlers are very good at this.  They play all the cards of Jewish guilt against a populace which is largely secular, but which can easily be made to feel sorry for abandoning the faith.  In this and in so many other ways, the settlers hold the rest of Israel hostage.  They do so by invoking Jewish third-rail memes like Holocaust and anti-Semitism.  They’re also expert in exploiting the supposed democratic values of the State whenever their own rights are compromised.  Though they are more than prepared to trample on the rights of non-settlers, both Jewish and Palestinian, at any opportunity. 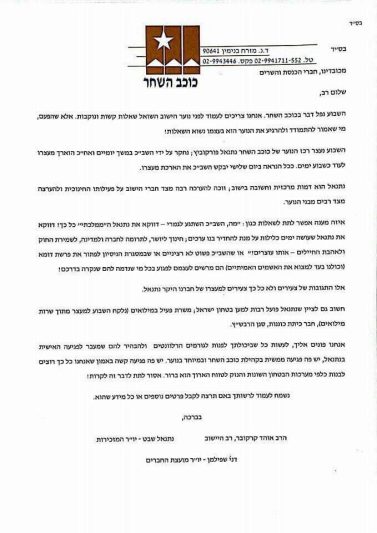 They  scream about Israel violating its democratic norms when they don’t believe in democracy.  Virtually every settler leader will tell you that their constituency believes in a Jewish state and has no use for Israeli democracy (echoing Meir Kahane).  Even the majority of secular Israelis believe that in a clash between democracy and Judaism, the latter should prevail.  Thus it’s the height of hypocrisy for settlers to demand rights they don’t value themselves.

UPDATE: To show you the power of the lobby, despite the fact that the Shabak could’ve held Porkovich for several more days legally, it just released him from prison before his detention order expired.  It NEVER does this with non-settler security detainees.  Just the opposite, it extends detention for weeks, months and sometimes years.

A “minyan” of settler rabbis wrote a letter to the Israeli public singing the praises of two of the detainees, citing them as shining models of Israeli manhood.  I simply must quote from them.  The “youth” of his settlement wrote this encomium about Porkovich’s extraordinary humanity:

We the youth of Kochav HaShachar are deeply troubled at the arrest of our youth secretary.

Netanel Porkovich has been our companion for several years.  We’ve enjoyed many hours with him in discussions, activities, hikes, etc.  We learned to value and appreciate him as an extraordinary man who leads us to positive acts and to contribute in every possible way.  Concepts like honesty, love of the Jewish people and the Land, the army and soldiers, contributing to society and the State…good deeds–all of this characterizes who he is.

This may not be pleasant to write, but when residents grew heated over issues concerning our existence here, he was the one who tried to calm and moderate us.

…We were horrified to learn that Netanel’s tefillin were withheld from him for five days.  These are acts of oppressive regimes.  It’s terrible to think that in the State of Israel they won’t enable a man to pray to his God and fulfill the most basic mitzvot!

Here is a joint letter from the rabbis protesting the arrest of Rabbi Odess, the father of suspect, Elisha Odess:

The Shabak, which is behind this deed, knows full well that Rabbi Odess has no connection to the crime committed in Duma.  It is nothing more than an exploitation of his status in order to exert pressure on the suspects.

…His arrest on his way to morning prayer indicates that the Shabak has lost its way, using prohibited methods against a faithful, law-abiding citizen.  A democratic state may not permit itself to use such illegitimate methods.

Note that the letter completely disregards the role Odess’ own son may’ve played in this crime.  And treats him as someone who played no role in educating a boy to do the things he’s alleged to have done.

Rabbi Ohad Krakauer and the leadership of Kochav HaShachar wrote yet another letter expressing astonishment that the democratic State of Israel would treat its citizen (a Jewish one, no less), Netanel Porkovich, so shabbily:

Last week, we discovered to our sorrow and deep frustration that in this democratic State of Israel it’s possible to perform grave acts against normative citizens under the color of law.  In our nation, a law-abiding citizen, a member of the President’s List, who serves in the IDF reserves and contributes to society–an educator who is deeply appreciated and who engages with youth and educates them in love of country–may find himself thrown in a Shabak cell, without even minimal conditions, without having committed any misdeed and without any suspicion against him.

In a conversation between our representatives and the officer conducting the investigation, we were shocked to discover that the attitude toward Netanel was one of a terrorist.  This crosses all red lines in a State which professes to be democratic and to protect the rights of the individual without regard to religion, sex or personal perspective.

Do not forget, as well, that Porkovich is portrayed in the press quite differently than in these letters.  There is a serious charge against him.  That he provided the vehicle used in committing the murders.  While it’s true he may not have known what the killers planned, he is an accessory after the fact and there is every reason to question him.

These supposedly learned rabbis have lost sight of the fact that while the suspects may be inconvenienced by having their religious objects denied them, their friends and family allegedly murdered three people and made a baby an orphan.  You’ll barely hear a whisper about this in these letters.  Though they wisely omit from them any reference to the killers themselves and their crime.  Certainly, if you spoke to them privately they would have a thousand justifications for these foul deeds.  But they’re wise enough to understand that this won’t “sell” well in Israel right now.

Share:
Comments on separate page in PDF format... (please read for a better perspective on what Richard is writing about!)