Perhaps the most widely admired of all the economic theories taught in our universities is the notion that an unregulated competitive economy is optimal for everyone.

In this optimal economy, each person is said to be a free actor who makes decisions purely in his or her own self-interest. Economists on both the right and left commonly say that these fundamental ideas tie our values of freedom and individuality to the success of our economies.

The problem is that these ideas are flawed. Along with George A. Akerlof, university professor at Georgetown and a fellow Nobel laureate in economic science, I have used behavioral economics to plumb the soundness of these notions.

In our book, “Phishing for Phools: The Economics of Manipulation and Deception” (Princeton, 2015), we question the all-commanding relevance of the free-market theory to our actual lives and economies. While we confirm the importance of free markets, we have found that market regulation has been crucial, and believe that will continue to be true in the future. 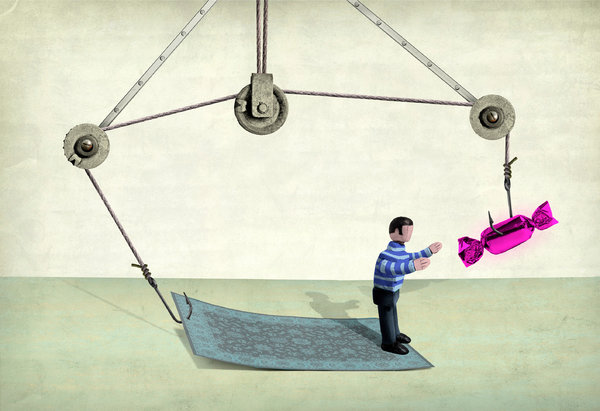 Don’t get us wrong: George and I are certainly free-market advocates. In fact, I have argued for years that we need more such markets, like futures markets for single-family home prices or occupational incomes, or markets that would enable us to trade claims on gross domestic product. I’ve written about these things in this column.

But, at the same time, we both believe that standard economic theory is typically overenthusiastic about unregulated free markets. It usually ignores the fact that, given normal human weaknesses, an unregulated competitive economy will inevitably spawn an immense amount of manipulation and deception.

We use the word “phishing” as a metaphor for a range of seemingly harmless modern market manipulations — like putting candy bars and gossip magazines at the checkout counter, where bored or tired adults and the parents of whining children will be tempted to spend a few extra dollars. And we coined the word “phool” to describe someone who does not understand how much thought and effort have gone into manipulating him or her.

These activities are widespread not because people in business generally have evil motives, but because of the existence of market forces — a phishing equilibrium enforced by competition. It works this way: When you realize that your competitor has used sophisticated and effective marketing tricks, then you will fall behind if you don’t follow suit.

Some businesses try to resist this trend on their own. Stores experimented decades ago with eliminating candy from checkout lines, for example, hoping to impress customers with their morality, but these efforts have largely failed. When profit margins are tight, those businesses that do not phish may simply be driven from existence.

Many economists see evidence of manipulation and deception in the marketplace, but most do not view the phenomena as a fundamental and ubiquitous problem with unregulated free markets. Deception and manipulation are inadequately discussed in textbooks on theory. As a result, market regulation is excessively maligned.

We see things differently: The success of the United States economy — and of those similar to it — can be attributed both to the relative freedom of its markets and to the fact that common-sense regulation has been imposed on them. Fortunately, many countries’ civil societies have injected a sense of morality into market activities.

The Thatcher-Reagan revolution a third of a century ago was a turning point away from market regulation, with mixed results. But the academic world’s formalization of free markets into mathematical economics supported that revolution with limited reservations.

Students in economic theory are now taught with few caveats that a competitive free-market economy will be “Pareto-optimal,” in homage to the economist Vilfredo Pareto. If you haven’t studied economic theory, a little explanation is in order.

A Pareto-optimal economy is achieved when it is impossible to make any one person better off without making at least someone worse off. That theory holds that each person makes economic decisions that result in the best possible outcome for that particular person. In economic jargon, each person individually maximizes a “utility function” that represents his or her own welfare. This theory is taught in many textbooks as the “first fundamental theorem of welfare economics,” and is presented with mathematical elegance. Protests against this theory, which were once common, have largely disappeared.

It’s worth noting, though, that the first protest came from Pareto himself. He did not intend to use his insights in the manner in which they are commonly employed today. Pareto observed that his concept of optimality neglected some important moral dimensions: People in free markets do not really manage to maximize what the philosopher Jeremy Bentham would call their utility. They don’t always succeed in maximizing their true welfare, but something else, something much more limited.

In 1918, Irving Fisher, the Yale economist, argued that what people maximize in their actions is something that could better be described as“wantability” rather than utility, for they are subject to temptation and mistakes in the vast array of purchases they make, leading profit-maximizing marketers to take advantage of them on a systematic basis.

In the first half of the 20th century, such critiques were of general interest. But they are little discussed today.

Current economic theory does recognize that if there is an “externality” — say, a business polluting the air in the course of producing the goods it sells — the outcome won’t be optimal, and most economists would agree that in such cases we need government intervention.

But the problem of market-incentivized professional manipulation and deception is fundamental, not an externality. In short, the superiority of untrammeled free markets — the fundamental theorem of welfare economics — has taken on the aura of a law from the heavens. Yet technology has advanced so that temptations are being manipulated ever more effectively.

In fact, the real success of economies that embody free markets has much to do with the heroic efforts of campaigners for better values, both among private organizations and advocates of government regulation. For example, before 1900 most of the patent medicines that were sold to the public were fraudulent.

Most of these frauds have since been eliminated, not by market forces, but by the activities of private citizens who took action not selfishly but for the public good. Examples include Harvey Washington Wiley (1844-1930) and Alice Lakey (1857-1935), whose campaigns led to the foundation of theFood and Drug Administration in 1906, and Stuart Chase (1888-1985) andFrederick J. Schlink (1891-1995), whose advocacy in the 1920s led to the establishment of Consumer Reports in 1936.

Unfortunately, such giants have not become truly famous and have been largely forgotten. Contemporary heroes tend more often to be entertainers or businesspeople who are little more than masters of manipulation. Maybe the reason is that the heroes’ criticism ignites doubt about many of our own day-to-day activities.

We have lapsed into a mode of thought that glorifies free markets and belittles economic heroism. We need those markets, but we need real heroes too.

Professor Robert Shiller attributes “The success of the United States economy — and of those similar to it — can be attributed both to the relative freedom of its markets and to the fact that common-sense regulation has been imposed on them. Fortunately, many countries’ civil societies have injected a sense of morality into market activities.”

Yes, common-sense regulation is necessary, but most importantly are the implementation of economic policies that will abate, if not end the exponential disassociation of production and consumption, the problem in the United States economy, and the reason that ordinary citizens must gain access to productive capital ownership to improve their economic well-being.

What is never addressed or taught to students of economic theory  is that there are practical means to achieve financing newly formed productive capital that is individually owned, independently of financial savings. Such, will take advantage of the  powerful latent desire of all people to acquire as their private property the ownership of productive capital. We need to teach how to lift all existing legal and institutional barriers to private property stakes as a fundamental human right. The desire to own productive capital has been effectively thwarted for all but a small minority by the traditional methods of corporation finance which limit eligibility to acquire newly formed capital to those who already own capital (as past savings). Ending this frustration would bring about the most rapid growth of new capital formation achievable by any means. Our aim, using self-liquidating capital finance mechanisms, should be to create a high level of wealth production and consumption along with conditions of maximum individual freedom and maximum personal incentive.

We need leadership to awaken all American citizens to force the politicians to follow the people and lift all legal barriers to universal capital ownership access by every child, woman, and man as a fundamental right of citizenship and the basis of personal liberty and empowerment. The goal should be to enable every child, woman, and man to become an owner of ever-advancing labor-displacing technologies, new and sustainable energy systems, new rentable space, new enterprises, new infrastructure assets, and productive land and natural resources as a growing and independent source of their future incomes.

One feasible way is to lift ownership-concentrating Federal Reserve System credit barriers and other institutional barriers that have historically separated owners from non-owners and link tax and monetary reforms to the goal of expanded capital ownership. This can be done under the existing legal powers (Section 13 of the Federal Reserve Act) of each of the 12 Federal Reserve regional banks, and will not add to the already unsustainable debt of the Federal Government or raise taxes on ordinary taxpayers. We need to free the system of dependency on Wall Street and the accumulated savings and money power of the rich and super-rich who control Wall Street. The Federal Reserve System has stifled the growth of America’s productive capacity through its monetary policy by monetizing public-sector growth and mounting Federal deficits and “Wall Street” bailouts; by favoring speculation over investment; by shortchanging the capital credit needs of entrepreneurs, inventors, farmers, and workers; by increasing the dependency of with usurious consumer credit; and by perpetuating unjust capital credit and ownership barriers between rich Americans and those without savings.

The Federal Reserve Bank should be used to provide interest-free capital credit (including only transaction and risk premiums) and monetize each capital formation transaction, determined by the same expertise that determines it today––management and banks––that each transaction is viably feasible so that there is virtually no risk in the Federal Reserve. The first layer of risk would be taken by the commercial credit insurers, backed by a new government corporation, the Capital Diffusion Reinsurance Corporation, through which the loans could be guaranteed. This entity would fulfill the government’s responsibility for the health and prosperity of the American economy.

Another source of information on phishing schemes is available via PixelPrivacy.com here.