There are only a few things the Mossad is “good” at.  And killing is the primary one.  They don’t do much that’s constructive.  They don’t make the world better or safer for Israel.  They don’t bring peace.  They don’t persuade people to compromise. They kill.  They cheat.  They steal.  They’re good at all those things.  But how do those things do anything to help Israel in the long-term?

Yeah, they take out an enemy.  But only to see a stronger, more formidable enemy replace the one they murdered.  Often, as in tonight’s case, they get revenge on someone who last posed any danger to any Israeli decades ago.  So what benefit is it to Israel to murder an unarmed man (story in Telegraph and Ynet) who left militancy long ago and was eking out a life as a shop owner in a foreign country to which he’d fled so long ago? 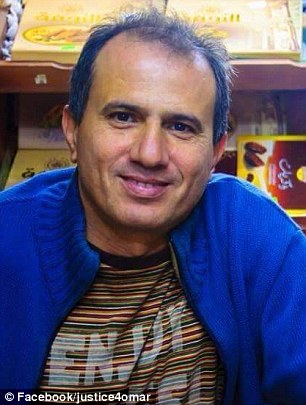 A little background: in 1986, three Palestinians killed a yeshiva student.  They were caught and tried.  They saved the State of Israel a great deal of legal effort and funds by confessing to the crime and not putting up a defense.  They were sentenced to life in prison (Hebrew), where two of them remained until they were freed in the Shalit prisoner exchange.  But the third, Omar Zaid, escaped after four years in prison while hospitalized during a hunger strike.  He eventually made his way abroad to Bulgaria.  There he met a Bulgarian woman, settled down, had a family including three children, and tried to live as normal a life as possible.

But last year, Israel filed an extradition warrant for his arrest.  In response, he abandoned his family and escaped once again to the Palestinian embassy in Belgrade, where he was given refuge.  To any normal country adhering to the rule of law, a foreign embassy is sovereign territory not to be violated.  That’s how Julian Assange escaped to the Ecuadorean embassy in London.  You don’t see MI5 sneaking into the embassy to liquidate him.  If it did, there would be a massive uproar.  Intelligence chiefs would be fired.  Prime ministers would resign.

In Israel, they give you a medal and make you Mossad chief.  Because Israel isn’t a normal country.  It thumbs its nose at international law.  Law exists only when it’s convenient to Israeli interests.  When it’s not, it doesn’t.  So, according to numerous Israeli sources, the Mossad, in an act of retribution, has assassinated Zaid.

How do we know Israel did it?  Because Israeli TV Channel 1’s military correspondent opened his report by saying: “Justice was done, even if very late.”  Bibiton (Israel HaYom) called it “a mysterious assassination” (not “murder”) in its lead headline.  Maariv says “the account was closed after 30 years.”

Israel isn’t responding to the Palestinian claim that the Mossad killed the wanted man from the Popular Front who gained refuge in the Palestinian embassy in Sofia…However, a security source told Kol Yisrael has no interest in targeting an old terrorist especially if it involves a great outlay of resources or endangering [agents].  He also noted that the first impression was that the killing wasn’t even very professionally executed.

Reading between the lines, I understand from this that murdering Zaid wasn’t an especially difficult task.  So Israel did it.  There were signs of violence on his corpse.  His upper body had been beaten and he was thrown from an embassy window and landed on the ground below.  A Palestinian human rights group said there were signs he was attacked with a “sharp object.”

A confidential security source refused to comment to me on the case, other than to say half-jokingly that I should consult Assaf Yariv.  To explain the joke, you must know that Yariv was the other candidate recently vying for the job of Shabak chief, which went to Nadav Argaman.  The Israeli media is not permitted to publish the names of Shabak officials (except the chief), so it has called him “Y.”  But I’ve named him here.  Israeli media reported that Yariv was “on loan” from Shabak to the Mossad.  In other words, my source was saying in a round-about way, that Yariv was the Shabak agent who would know the case files on wanted Palestinian fugitives like Zaid.  He could use all the knowledge and information Shabak could bring to bear to help the Mossad find and kill Zaid.  Which is precisely what happened. 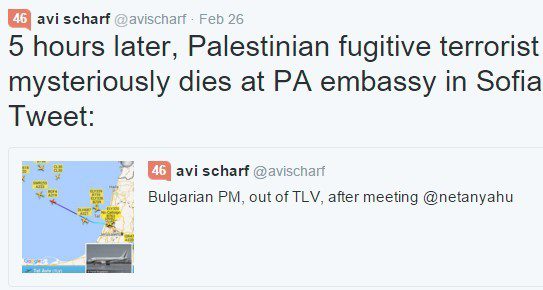 Bulgarian Collusion in the Hit

There is more irony to note here.  Bulgaria’s prime minister was visiting Israel until a few hours before the hit.  It happened only five hours after his plane left Ben Gurion according to this tweet (see display) from a Haaretz journalist whose rather unusual hobby is tracking international air traffic:

This is a pattern familiar to those who follow Mossad operations.  When Israel wants to kill or capture someone abroad they go as high up the food chain as they can.  They buy off the political echelon and especially the security services.  This happened in the case of Dirar Abusisi, when high-level Ukrainian security officials colluded with Mossad agents inside the country to kidnap him and spirit him out of the country to face bogus charges in Israel.  The reward?  Ukraine’s prime minister won premium concessions from Israel in international trade and tourism talks which followed shortly afterward.

Similarly, you will find in the coming months that Israel and Bulgaria have negotiated trade, tourism or arms deals of great benefit to Bulgaria.  Mark my words.

Like Ukraine, Bulgaria is a deeply corrupt country in which every politician and security official has a price.  For an assassin to gain access to the Palestinian embassy would be relatively easy in that case.  It’s even possible that someone inside the embassy was paid off to offer such access.

But when a stronger country exploits the corruption of a weaker one it is the stronger country that carries the greater burden of guilt.  Make no mistake: Israel too is a corrupt country.  Not just for buying off foreign leaders to execute their plots, but for ignoring diplomatic protocol and international law.

Ynet indicates that Zaid’s case was discussed with the Bulgarian leader during his talks with Netanyahu.  The Bulgarian allegedly told Bibi that he must respect the law:

Borisov…said Nayef’s [Zaid] extradition had been brought up in meetings by both the Palestinian and Israeli authorities.

“I told both sides that Bulgaria respects the rule of law and will follow the legal procedures in the case,” he told reporters in parliament on Friday.

Presumably, this meant to Bibi that he could not force Zaid to leave.  This refusal apparently gave the green light to the assassination.

To what purpose was Zaid killed, I ask again?  Was he a mastermind of terror?  Was he even as important as another Palestinian assassinated by the Mossad, Mahmoud al Mabouh?  No, this guy was a nebech.  A nobody.  Yes, he murdered an Israeli.  But hundreds of Palestinian prisoners who murdered Israelis have been freed in prisoner exchanges (including his two co-conspirators).  Israel wanted this man because he was the one who got away.  He escaped justice by fleeing.  So he needed to be taught a lesson.

So what?  What good is the lesson?  How does it help anything or anyone?  It puts a feather in the cap of a few Kidon agents who offed him.  It gives Bibi & Bogie something to share a schnapps over in celebration.  It gives Israeli leaders a few sound bytes and Cheshire grins which they break out when reporters challenge them to take responsibility for the crime.

What heroes those Mossad assassins are!  They killed an unarmed man, then threw his body into the street.  A heroic deed which does the nation proud!

In the scheme of things what does it really do?  Nothing.  It’s an empty gesture.  It wins the Likud a few votes in the next election because killing Palestinians is good business for Israeli politicians.  Killing one is good.  Killing 2,300 as the IDF did two summers ago is even better.  As long as Israel keeps killing Palestinians the Likud will win elections.  Perhaps forever, or until the Messiah comes.  Or maybe until a general or prime minister is dragged into the dock at the Hague.