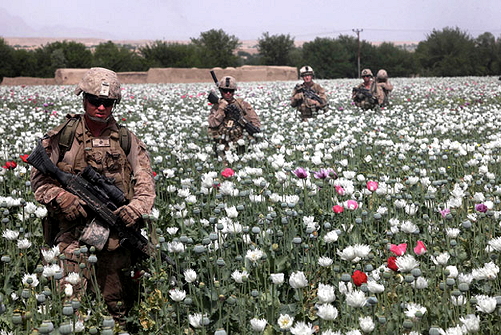 “Marines with Fox Company, 2nd Battalion, 5th Marine Regiment, move through a poppy field on their way to Patrol Base Mohmon in the Lui Tal district, Helmand province, Afghanistan, April 17, 2012. U.S. Marine Corps photo by Lance Cpl. Ismael Ortega.”
– http://www.motherjones.com/
“U.S. Marines Protect Afghan’s Poppy Fields”
by Paul L. Williams
“Hey, guys, don’t pick the poppies. That’s the order from the Obama Administration to the 4,000 Marines presently engaged in Operation Khanjar or “Strike of the Sword,” an invasion of the Taliban infested Helmand Province in southern Afghanistan. The Marines of Bravo’s Company 1st Platoon sleep beside groves of poppies. Troops of the 2nd Platoon walk through the fields on strict orders not to swat the heavy opium bulbs. The Afghan farmers and laborers, who are engaged in scraping the resin from the bulbs, smile and wave at the passing soldiers.The Helmand province is the world’s largest cultivator of opium poppies – the crop used to make heroin. Afghanistan grew 93 percent of the world’s poppy crop last year, with Helmand alone responsible for more than half of the opium production in the country, according to the United Nations Office on Drugs and Crime. Heroin, as it turns out, represents the only staple of the Afghan economy. The country manufactures no domestic products for exportation and the rocky terrain yields no cash crops – except, of course, the poppies. The poppies fuel the great jihad against the United States and the Western world. More than 3,500 tons of raw opium is gleaned from the poppy crops every year, producing annual revenues for the Taliban and al Qaeda that range from $5 billion to $16 billion.

Destroying the fields could very well put an end to terrorist activities in Afghanistan and Pakistan. But the Obama Administration remains intent upon protecting the poppies so that the Afghan farmers and local drug lords can reap the benefits of what purports to be a bumper crop.

Many Marines in the field are scratching their heads over the situation. Jason Striuszko a journalist embedded with the U.S. Marines in Garmser, reports that many of the leathernecks are scratching their heads at the apparent contradictions — calling in airstrikes and artillery on the elusive Taliban while assuring farmers and drug lords that they will protect the poppies. “Of course,” Striuszko says, “those fields will be harvested and some money likely used to help fuel the Taliban, and the Marines are thinking, essentially, ‘huh?’”

“It’s kind of weird. We’re coming over here to fight the Taliban. We see this. We know it’s bad. But at the same time we know it’s the only way locals can make money,” said 1st Lt. Adam Lynch, 27, of Barnstable, Mass. Richard Holbrooke, the Obama Administration’s top envoy in Afghanistan, says that poppy eradication- for years a cornerstone of U.S. and U.N. anti-drug efforts in the country– has only resulted in driving Afghan farmers into the hands of the Taliban.

Richard Holbrooke, the Obama Administration’s top envoy in Afghanistan, says that poppy eradication – for years a cornerstone of U.S. and U.N. anti-drug efforts in the country – has only resulted in driving Afghan farmers into the hands of the Taliban. The new approach, Holbrooke maintains, will try to wean the farmers off the lucrative cash crop by giving them help to grow other produce, like wheat, corn and pomegranates.

Most of the 33,000 U.S. troops in Afghanistan operate in the east, where the poppy problem is not as great. But the 2,400-strong 24th Marines, have taken the field in this southern growing region during harvest season. An expert on Afghanistan’s drug trade, Barnett Rubin, complained that the Marines are being put in such a situation by a “one-dimensional” military policy that fails to integrate political and economic considerations into long-range planning. “All we hear is, not enough troops, send more troops,” said Rubin, a professor at New York University. “Then you send in troops with no capacity for assistance, no capacity for development, no capacity for aid, no capacity for governance.”

Staff Sgt. Jeremy Stover, whose platoon is sleeping beside a poppy crop planted in the interior courtyard of a mud-walled compound, said the Marines’ mission is to get rid of the “bad guys,” and “the locals aren’t the bad guys.” “Poppy fields in Afghanistan are the cornfields of Ohio,” said Stover, 28, of Marion, Ohio. “When we got here they were asking us if it’s OK to harvest poppy and we said, ‘Yeah, just don’t use an AK-47.’”

Paul L. Williams, Ph.D., is the author of such best-selling books as “The Day of Islam,” “The Al Qaeda Connection,” “Osama’s Revenge: The Next 9/11,” “The Complete Idiot’s Guide to the Crusades” and “The Vatican Exposed.” An award-winning journalist, he is a frequent guest on such national news networks as ABC News, CBS News, Fox News, MSNBC, and NPR. Williams operates from his blog thelastcrusade.org
•
Posted on this blog Friday, January 8, 2010: 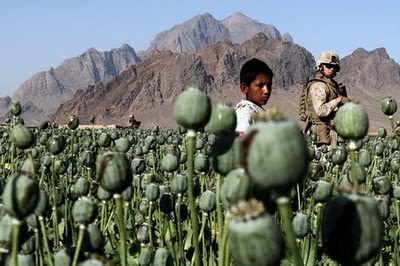 “Afghanistan: Why We’re REALLY There”
by Prof Peter Dale Scott
“The social costs of this drug-assisted war are still with us: there are said, for example, to be now five million heroin addicts in Pakistan alone. And yet America in 2001 decided to do it again: to try, with the assistance of drug traffickers, to impose nation-building on a quasi-state with at least a dozen major ethnic groups speaking unrelated languages. In a close analogy to the use of the Hmong in Laos, America initiated its Afghan campaign in 2001 in concert with a distinct minority, the Tajik-dominated Northern Alliance. In a closer analogy still, the CIA in 2000 (in the last weeks of Clinton’s presidency) chose as its principal ally Ahmad Shah Massoud of the Northern Alliance, despite the objection of other national security advisers that “Massoud was a drug trafficker; if the CIA established a permanent base [with him] in the Panjshir, it risked entanglement with the heroin trade.”There was no ambiguity about the U.S. intention to use drug traffickers to initiate its ground position in Afghanistan. The CIA mounted its coalition against the Taliban in 2001 by recruiting and even importing drug traffickers, usually old assets from the 1980s. An example was Haji Zaman who had retired to Dijon in France, whom “British and American officials…met with and persuaded … to return to Afghanistan.”

Why does the U.S. intervene repeatedly on the same side as the most powerful local drug traffickers? Some years ago I summarized the conventional wisdom on this matter: Partly this has been from realpolitik – in recognition of the local power realities represented by the drug traffic. Partly it has been from the need to escape domestic political restraints: the traffickers have supplied additional financial resources needed because of US budgetary limitations, and they have also provided assets not bound (as the U.S. is) by the rules of war. These facts have led to enduring intelligence networks involving both oil and drugs, or more specifically both petrodollars and narcodollars. These networks, particularly in the Middle East, have become so important that they affect, not just the conduct of US foreign policy, but the health and behavior of the US government, US banks and corporations, and indeed the whole of US society.

Persuaded in part by the analysis of authors like Michel Chossudovsky and James Petras, I would now stress more heavily that American banks, as well as oil majors, benefit significantly from drug trafficking. A Senate staff report has estimated “that $500 billion to $1 trillion in criminal proceeds are laundered through banks worldwide each year, with about half of that amount moved through United States banks.” The London Independent reported in 2004 that drug trafficking constitutes “the third biggest global commodity in cash terms after oil and the arms trade.”

Petras concludes that the U.S. economy has become a narco-capitalist one, dependent on the hot or dirty money, much of it from the drug traffic. As Senator Levin summarizes the record: “Estimates are that $500 billion to $1 trillion of international criminal proceeds are moved internationally and deposited into bank accounts annually. It is estimated half of that money comes to the United States…”

Washington and the mass media have portrayed the U.S. in the forefront of the struggle against narco trafficking, drug laundering and political corruption: the image is of clean white hands fighting dirty money from the Third world (or the ex-Communist countries). The truth is exactly the opposite. U.S. banks have developed a highly elaborate set of policies for transferring illicit funds to the U.S., investing those funds in legitimate businesses or U.S. government bonds and legitimating them. The U.S. Congress has held numerous hearings, provided detailed exposés of the illicit practices of the banks, passed several laws and called for stiffer enforcement by any number of public regulators and private bankers. Yet the biggest banks continue their practices, the sums of dirty money grows exponentially, because both the State and the banks have neither the will nor the interest to put an end to the practices that provide high profits and buttress an otherwise fragile empire.

In the wake of the 2008 economic crisis, this analysis found support from the claim of Antonio Maria Costa, head of the UN Office on Drugs and Crime, that “Drugs money worth billions of dollars kept the financial system afloat at the height of the global crisis.” According to the London Observer, Costa said he has seen evidence that the proceeds of organised crime were “the only liquid investment capital” available to some banks on the brink of collapse last year. He said that a majority of the $352bn (£216bn) of drugs profits was absorbed into the economic system as a result. Costa said evidence that illegal money was being absorbed into the financial system was first drawn to his attention by intelligence agencies and prosecutors around 18 months ago. “In many instances, the money from drugs was the only liquid investment capital. In the second half of 2008, liquidity was the banking system’s main problem and hence liquid capital became an important factor,” he said. Thus the war machine that co-opted Obama into his escalation of a drug-corrupted war is not just a bureaucratic cabal inside Washington. It is solidly grounded in and supported by a wide coalition of forces in our society.”